Where on one side, India is considered to be amongst the fastest developing nations, various towns and districts in our country are still trapped in the illogical believes for which millions of people endanger their lives in order to have good fortune or to please their lord. Here are some bizzare rituals that are followed across India which will definitely make you cringe.

In the Karur district of Tamil Nadu, every year, on the 18th day of the Tamil month of Aadi, hundreds of devotees gather at the Mahalakshmi Temple to volitionally allow the priests to smash coconut on their heads in order to attain good fortune and health. During the British rule, they had the proposal of a railway line crossing the temple but the followers protested against it and at that time, Britishers proposed a deal that said that if the people are able to smash the coconut shaped stones on their haed, they will change the track of the railway line. The people of the district were able to do it and won, since then the ritual is going on.

2. Tossing the baby from 30ft. for good fortune

Blind faith literally takes control over your mind and makes you do unimaginable stuff. A practice that is being performed by both Hindus and Muslims of India for over 700 years is one such example. Terrified toddlers are shaken from the balcony of a 30ft high temple and is tossed down to the ground where a group of men stand holding a sheet in which the baby is caught. No matter how traumatizedthe child gets or how much he sobs, the ritual is performed anyway. Baba UmerDargah near Sholapur, Maharashtra and Sri Santeswar Temple near Indi, Karnataka are the major hosts of this insensitive activity. The national Commission For Protection Of Child Rights had investigated the case and according to the organizers of the ritual, not even a single injury to any of the children has been reported so far.

In Banaras, the Aghori Sadhus believe in giving up the world by looking for ‘purity in the filthiest’. They eat human parts that are remained after the cremation and also have intercourse with the corpses. They are believed to have tantric powers of healing. It refers to the act of hitting one-self in the name of punishing oneself for the bad deeds in front of their god. All over the world, this unnerving activity is performed by Christians and Muslims.

In context of Christianity, it is performed to the flagellation of Christ, an episode in the Passion of Christ prior to Jesus’ crucifixion. This practice that involves humiliation of the flesh for religious purpose was then continued by many Christians.

In context of Muslims, those from the Shia community, all over the world march on the 10th day of the holy month of Muharram. On the very same day, they carry out the self-flagellation act to commemorate the battle of Karbala and the martyrdom of Hussein. This frightening display of devotion makes men whip their bodies with chains mercilessly until blood is more visible than the skin on their body. 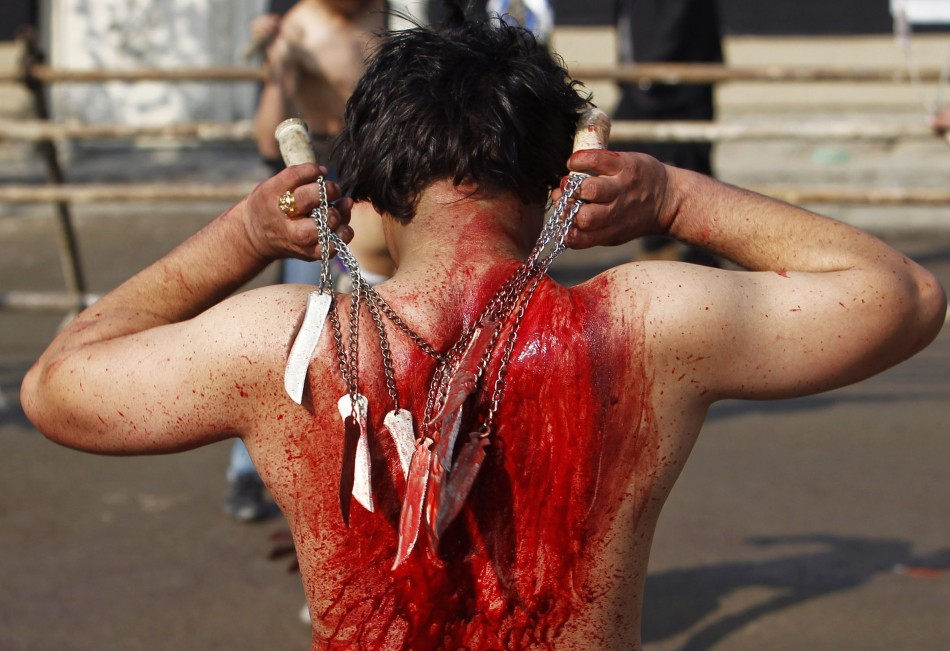 No matter how painful it get, when it comes to the devotion and faith of the people, every logic becomes baseless. Redemption, known as Moksha In the layman’s language is supreme terminal of all human endeavors but the only thing that stands in the way of it, according to Jains and Buddhists is ignorance and hair is mostly considered as metaphor for human attachment. Therefore, Jain monks and nuns started to pull out each strand of hair on their head so that they could abdicate their secular atteachments. 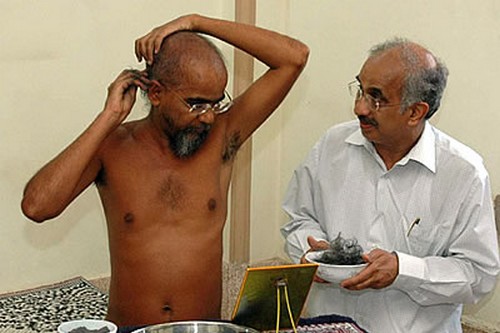 An act performed by people in order to fulfill the vows offered to Goddess Kali and to please her will leave you fear-stricken. This activity is usually carried out by south Indians of Kerala on Makara Bharani Day and KumbhaBharani Day. The dancers are dressed up like Garuda (vehicle of Lord Vishnu) and after a dance performance they are hanged by hooking their flesh on their backs like eagles. The person who is supposed to execute this action has to abide certain rules and regulations. He is not allowed to eat animal food, enjoy the worldly pleasures and is supposed to visit the temple every day in the morning also their body is rubbed with oil every day to prepare their flesh for the hook hanging. 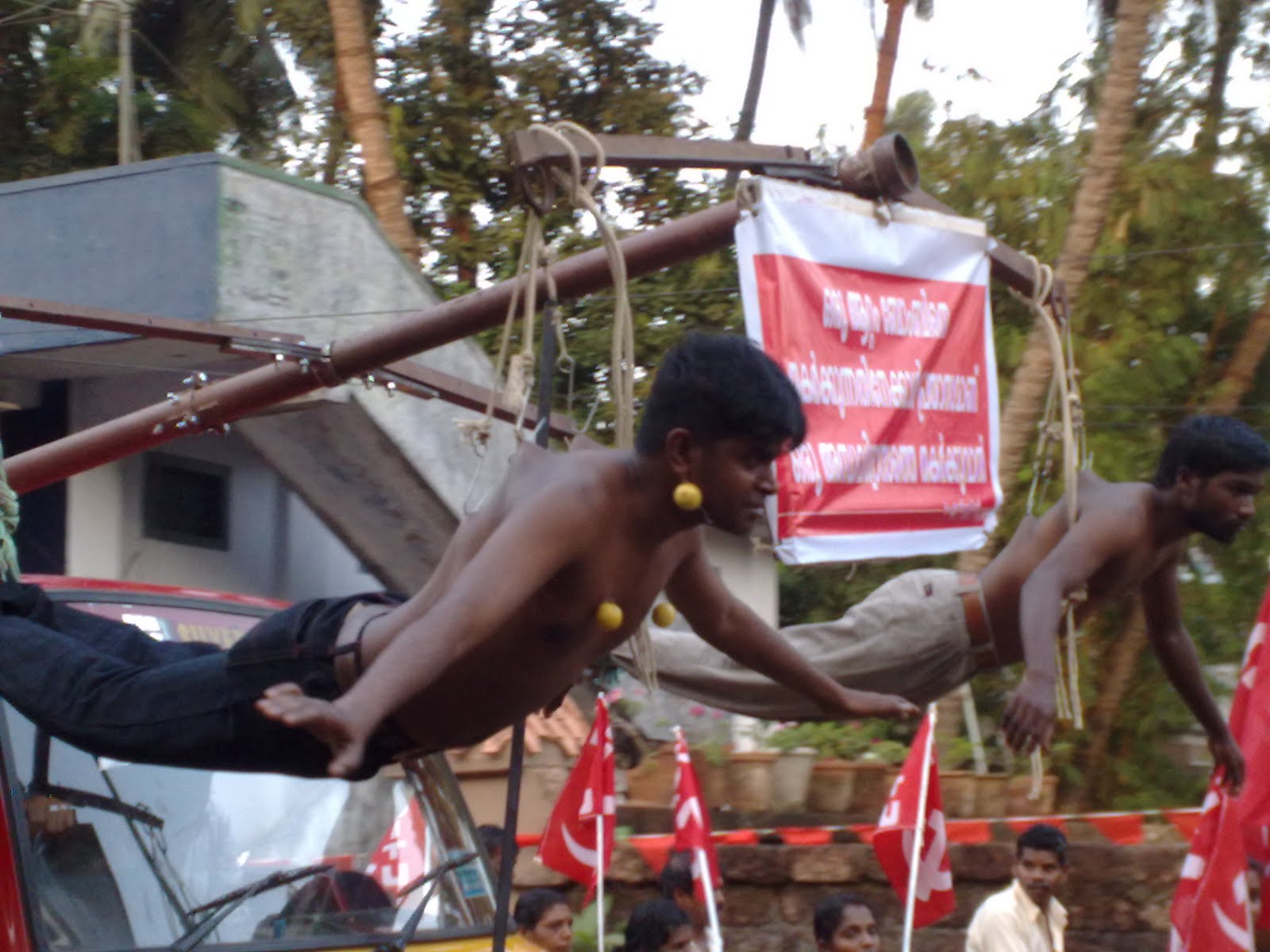 7. Thaipoosam (Hooking the flesh and piercing the body), Tamil Nadu

It is a festival that honors Lord Kartikeya in Tamil Nadu and in parts of Southern India during the Tamil month of Thai. To start with, a 48-day long fast is kept by the devotees, following which, most of them pierce their body with hooks, skewers and lances and they even try to pull trucks with hooks attached in their skin. Other people

Pierce their tongue to hinder their power of speech so that their full concentration lies only in the devotion to god.

Most Hindus worship cows, which in a way is good but when things are taken overboard, they become uncanny. During the GovardhanPooja, which is celebrated the next day after Diwali, in the Bhiwdawad village of Maharashtra, people decorate their cattles with colors and flowers and then they, themselves lay down on the ground and allow those cattles to tamper over them! They believe that this act will make their Gods answer their prayers.

Certain unimaginable facts are way beyond the knowledge of most people. The practice of Teemithi was started in Tamil Nadu but has also spread to some parts of Sri Lanka, Singapore and South Aftrica.  This festival is a celebration of Drapadi and just like she had to walk on a bed of fire after the Kurukshetra war, similarly devotees practice the same to please the goddess so that she would grant their wishes.

There is no limit to celebrations but when the festivals start taking a brutal turn, they must be stopped. But sadly, it doesn’t happen. The Bani festival has been celebrated for over 100 years now in which, during every Dussehra, hundreds of people from Andhra and Karnataka, assemble at a temple and hit each other with lathis on the head at midnight. The worst part is that earlier, this was done just to commemorate the killing of demon by Shiva. It is reported that earlier axes and spears were used in the place of lathis.