Home  /  Entertainment, Latest Story, Lifestyle  /  11 Struggles Only Those Using Public Transport In India Will Get

11 Struggles Only Those Using Public Transport In India Will Get

All of us have used public transport at some point of time in our lives. Some of us use it to commute on a daily basis, whereas others hitch the occasional ride in a shared auto or metro when their personal vehicle just isn’t up for the task. Sure it’s convenient and relatively less expensive than using your own mode of transportation (or booking an entire cab to yourself for instance) but let’s face it, there are still a lot of repercussions to public transportation. Let’s try and list out a few of the most bothersome and obvious ones:

It doesn’t matter if you missed the alarm and are running late for an important meeting, the metro will still move at its assigned pace, stopping after every couple kilometres to give your stress levels time to rise.

2. There is literally no concept of personal space

If you happen to be travelling during the rush hour then it’s time to say goodbye to your personal space because the next interval of time is bound to be filled with indefinite body parts just pushing and pulling and hitting you in the face!

3. There’s always a group of aunties glaring at you from the corner

It doesn’t matter if you look like a drug addict or if you look like the most studious kid ever, there will always be a group of aunties nearby who’ll look at you with their judgmental glare and turn the entire ride an awkward mess.

4. Getting trapped with creepy passengers

The worst part about autos is that sometimes, the people that happen to be hitching a ride with you are creepy as hell! This includes the eerie stares, the awkward words and of course, being squeezed between people in dirty clothes is just excruciating.

5. Some people just don’t know when to lower the volume

Whether it’s the music playing through their earphones that everyone in vicinity can hear, or just their own voice babbling loudly into the phone receiver, the people who can’t keep their volume down are the worst people to travel with.

6. Traveling in the aftermath of rain is a mess 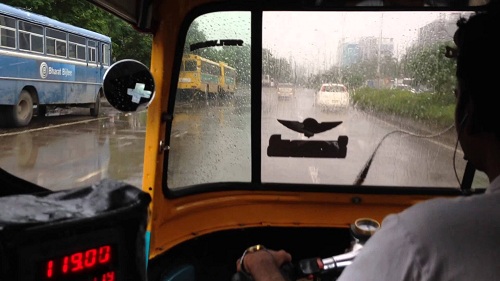 While you sit at the edge of the auto hoping that a spray of mud doesn’t hit your face and ruin that crisp white shirt you chose to wear for your presentation, probably the only thing that could be worse is falling on the muddy road below the metro station.

7. Juggling for your wallet amidst all the other things is a savvy feat

Fishing for change to give to your auto driver while trying to keep your bag and carry-ons from falling to the ground is something that only you know how you manage to get through every day.

8. Changing the metro and auto and everything is super exhausting

An auto ride, followed by the metro, changing your line at Rajiv chowk, taking another metro and finally one last auto before you walk the remaining distance to home leaves you exhausted.

We’ve all seen this at some point, standing outside the metro as you watch the exemplary crowd racing down the steps to escape the station. And then of course the never ending line, it’s a real life horror if you don’t own a metro card in this situation.

10. The state of your face after an auto or metro ride

It doesn’t matter if you took the precaution of wrapping a scarf around your head before setting out because the moment you check yourself in the mirror after the ride, your state of distress will make you feel like taking a shower and doing your morning routine all over again!

11. The misconception of meeting your soul mate on public transport

The movies are absolutely wrong about finding your true love on a bus or a train, it just never happens. In fact, it’s hard enough to find someone decent of the opposite gender to even be in your vicinity on an auto ride!