AIB’s Tanmay Bhatt has invited trouble for himself by posting a very controversial video of a mock conversation between India’s two legends- the God of Cricket, Sachin Tendulkar and the singer Lata Mangeshkar. The video is captioned “Sachin vs Lata Civil War” and shows an argument, supported with expletives over who’s better between Sachin and Virat Kohli. Some of the punchlines used against Mangeshkar in the video include “Jon Snow also died, so should you”; “Your face looks like someone has kept you in water for eight days”.

In response to the not so funny video, Maharashtra politician Raj Thackeray led Maharashtra Navnirman Sena has filed an FIR against the comedian and some party members have even threatened to beat him up. 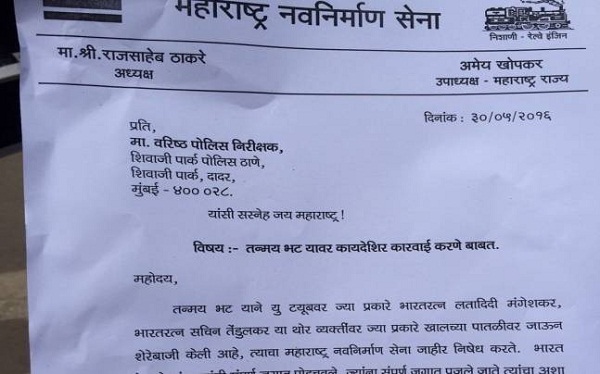 “Whenever we will see Tanmay, we will beat him. We will not let him do any shows,” the MNS leader Ameya Khopkar said.”Some things should be beyond politics. Our agenda is clear. Those who have made videos on Lata Mangeshkar and Sachin Tendulkar should be arrested,” he demanded.

Some of the Bollywood celebrities like AnupamKher, Celina Jaitley and RiteishDeshmukh were also against the appalling video and tweeted against Tanmay calling the video “#disgusting&disrespectful”.

Tanmay’s blunt response to the above mentioned incidents was tweeted as “Roast wale din yaad aa gaye by god”. This was in context with the outrage which was created over AIB’s expletive-laden roast of actors Ranveer Singh and Arjun Kapoor in December 2014.

Check out the video here:

A lover of football, fashion and art, Shivani has been breaking stereotypes all throughout her life. An auto-didact at heart, she is an egalitarian who lives for knowledge and to express herself, especially on global political issues.