Home  /  Entertainment, Humor, Just In  /  Chetan Bhagat Is Not Exactly The ‘Spectacular’ Author You Think He Is

Well, to be honest, I haven’t entirely read any of his books, having dropped them after the first few chapters of his terribly bland writing style. The first I heard of him was in grade 7 when one of my classmates daringly decided to read the sex scene aloud in class; it was something new to all the then thirteen year olds, and it pains me now to realise that was the moment of time when many of them drifted into the world of ridiculously stupid books.

Maybe my criticism of him carries no weight, for he’s proved himself to be a bestseller hasn’t he? There are only two conclusions I can come up with from this observation; either the Indian youth is getting dumber as the days go by, or they simply don’t have anyone else to teach them any better.  The fact of matter remains that Chetan Bhagat is a terrible writer, and there’s more than just one point to prove that. The fact that the current Indian youth has the reading level of a 5th grader for them to hold his writing in such high esteem pains me till no end.

In fact, the last time I ventured to the local bookstore, what left me galled was that Chetan Bhagat’s Revolution 2020 and Two States were placed in the ‘Bestseller’ rack, but authors like Ashwin Sanghi and Amish Tripathi were hidden in the midst of countless other books and authors that don’t receive the appreciation they deserve.

The only explanation for this is simple; the Indian reading audience doesn’t want to work their brain and read excellent writing, they’re still hooked onto the ‘bollywood’ style Chetan Bhagat fiction with simple language and the same overused love story to back it all up. It’s no wonder his book adaptations worked out so well on the silver screen! 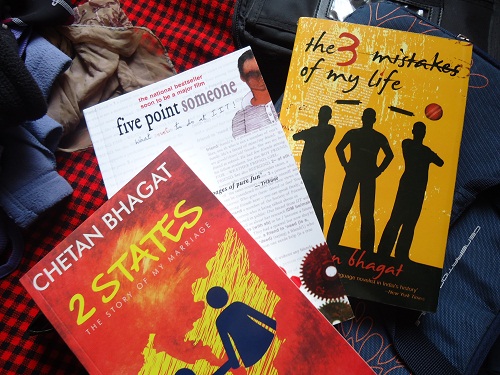 Let’s start with the basics. What makes a good book? An original plotline, something that makes you think and wonder, something that exercises your mind more than your eyes and touches your soul more than just your fingers. A story that captures emotion in little pixels made of words, but Mr. Bhagat barely manages to capture enough grammar and vocabulary to score in a GRE exam.

With regard to characters, a good book portrays the gradual development of the characters from the first page till the last. Sure they can have faults and misgivings, but they need to work upon them, a hero can’t be a hero until he sculpts himself into one; but Mr. Bhagat’s characters are proclaimed as heroes from the start, they go through some sort of obstacle in life and come through in the most predicable and expected manner possible. There’s nothing new there, there’s nothing interesting. In fact, the characters are so blandly portrayed that I fail to remember even a single name from any of the books that I actually did attempt to read (my terrible memory is not to blame for this one).

Mr. Bhagat’s stories revolve around the few same concepts with a little bit of spice added in through some semi-pornographic encounters which are so unrealistic and explicitly fake that it leads me to wonder whether he’s ever been in such an encounter himself! This author should have stopped writing after his first book if all he was going to do was rephrase the same story over and over again.

Simplistic writing does tend to attract a larger crowd of readers and maybe that’s why his books have sold thousands of copies throughout the nation, but the style of writing which he uses in his books is something that one would hardly want to associate with a bestselling author. 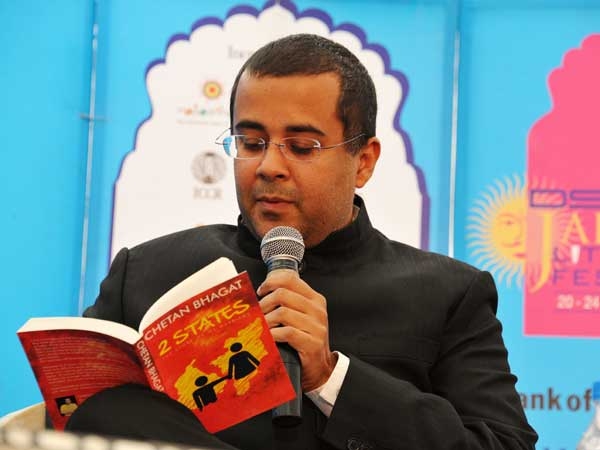 “Why should any guy want to be only friends with a girl? It’s like agreeing to be near a chocolate cake and never eat it. It’s like sitting in a racing car but not driving it.”

Really? So according to Mr Bhagat, being friends with a girl is useless? I really don’t understand the moral logic behind this belief. Not to mention the mental logic behind the line “agreeing to be near a chocolate cake”. Is this really how we expect one of the most popular authors to write?

“How can such scary looking parents create something so cute?”

And how can such an acclaimed author have the writing level of a 5th grader.

“That’s what human relationships are about – selective sharing and hiding of information to the point of crazy confusion.”

I’m pretty sure every school going kid could tell that ‘hiding of information’ isn’t exactly how the English language works. Apart from that, I’m sorry to say that Chetan Bhagat has been getting involved in the wrong kind of relationships.

Finally, let’s take a look at this excerpt from his most recent, Half Girlfriend:

“Once upon a time, there was a Bihari boy called Madhav. He fell in love with a girl called Riya. Madhav didn’t speak English well. Riya did. Madhav wanted a relationship. Riya didn’t. Riya just wanted friendship. Madhav didn’t. Riya suggested a compromise. She agreed to be his half-girlfriend.”

First of all, ‘half girlfriend’? Seriously? I’ve heard nothing more ridiculous than this ever in my life. Not only is this the obvious setting for the most idiotic romantic novel ever, but from simply these few lines I can gauge the apparent intelligence level of both of these characters.

To be honest, this is the kind of stuff even my seven year old brother could pen down. His sentences are bland, his descriptions non-existent. And does he not know how to use adjectives? It bothers me to think that this is the kind of writing that circulates amongst the nation’s youth these days. And that this in turn has sparked off a chain reaction of college students writing books about uncreative romantic stories that somehow manage to be appealing to the public (eg Durjoy Datta).

Mr. Bhagat has often referred to his confidence and trust in the Rupa publishing house to be by his side if all else fails. But this leads me to wonder, if he approached internationally acclaimed houses like Harper Collins or Hachette, would they even bother to read the entire synopsis? I think not.

What I fail to comprehend, is how people continue to buy and love his books, despite the fact that in my opinion, they’re awful. I suppose it’s because these youngsters haven’t read anything better to know what true great writing is like. If only they knew that books can be so much more than what they have on their shelves.