A case of discrimination took Facebook by storm after a ‘talent director with Sony Music Entertainment’, Radhika Saini, allegedly told a Muslim applicant that the channel does not hire Muslim candidates fearing they could be terrorists.

The applicant, a Noida-based Syed Salman Haider, had approached Saini on Facebook via private message asking, “Hello Ma’am, I am interested in a post I read regarding requirements of models for shoot.”

The applicant asked, “May I know the specific reason for that?”Saini replied, “as they could be terririost that is why (sic).” 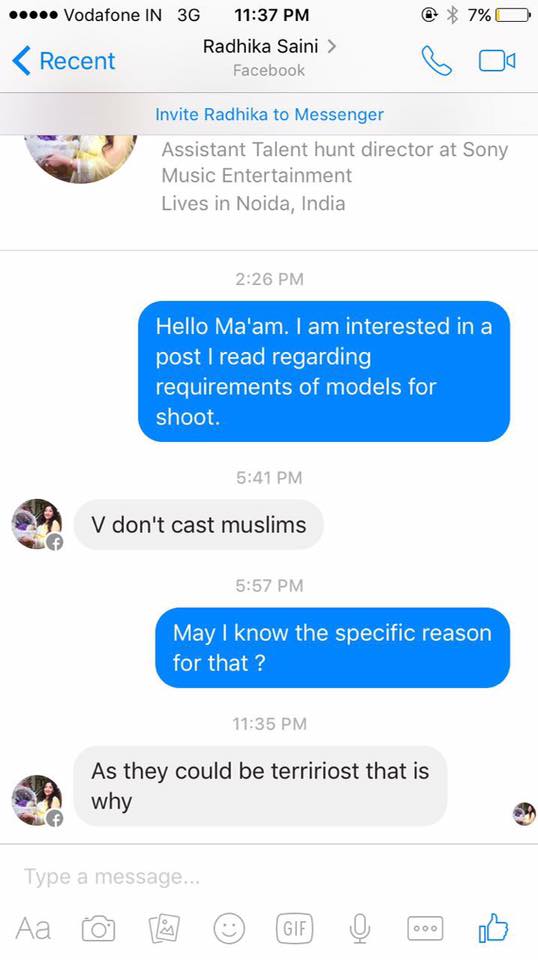 “Discrimination- is not new and this is appalling.
When the biggest actors in our country are Muslims, then why can’t a Muslim kid try for modelling? Is this the company policy or the assistant talent hunt director feels this way? Why are Muslims burdened with the stigma of being hand in glove with the terrorists? The real terrorists have won when the people of our country begin to feel like this.  That is their big plan. An army of disgruntled Muslim youth ready to fight against their own countries. So thank you ‘Radhika Saini’ for helping the terrorists out. Good job!! This is the plague that will engulf the world, however sad it is!” 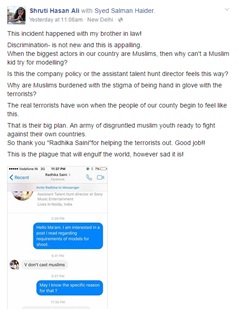 There was a widespread public outrage as the screenshot of the conversation got viral soon and this pushed Saini to provide a clarification. Upon this provocation, this is what Saini had to say:

“Some muslim community hakers are hacked my id and playing with my id now (sic)” Amidst this, something mysterious happened. Saini changed her designation on Facebook to “Self Employed”.

On Thursday, Sony Music clarified their stance on the issue: 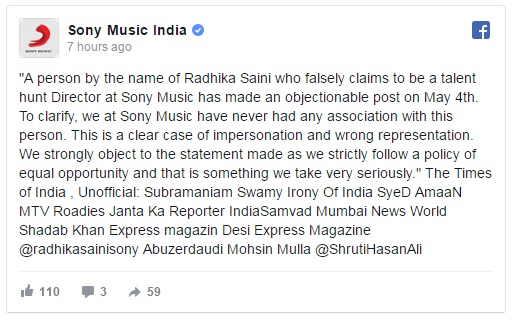