Home  /  Sports, Trending  /  The Poster For Sachin’s Biopic Is Here And We Can’t Wait For The Trailer To Release

Bollywood is coming up with yet another biopic and this time it’s on the legendary cricketer Sachin Tendulkar.  This would be the third biopic on a cricketer this year after“Azhar”, a biopic on India’s ex-captain Mohammed Azharuddin and “MS Dhoni”a biopic on our most successful skipper Mahendra Singh Dhoni, both of which are already slated to release later this year.

The first poster of the movie SACHIN-A BILLION DREAMS was shared on Twitter by the master himself.  Have a look at it – 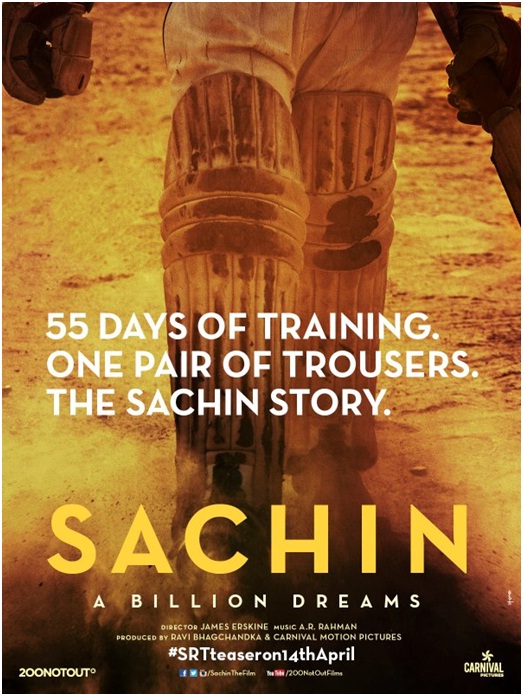 The movie has been directed by a London based award winning writer, producer and director James Erskine and is being produced by a Mumbai based production company named 200 NOT OUT, which have 150 advertisements and shorts films credited to them.

The work on the movie began last year and is currently being shot on real-time basis. A lot of famous personalities across the globe are said to be a part of it. It has also been reported that the production house is in constant touch with various cricketing boards across the globe to get access to the video and other materials from the past to be included in the movie. The music maestro A.R.Rahman is going to be the music composer for the movie.

The best part about the movie is that it will feature the Master Blaster himself. The legend retired in 2003, played an astonishing 200 Tests,has 100 centuries combined in all formats to his name. He scored 34,357 runs played in the 664 international one-day matches.

The movie which will showcase the phenomenal rise of Sachin, will also highlight unseen aspects of his life. It is already getting a lot of support from several ex-players and Bollywood stars. Here are some of the tweets from famous personalities.

The teaser for the movie will be released on 14th April 2016 at 1pm and we all can’t wait to get a look at it. Keep watching this space for more news on this.