Home  /  Entertainment, Trending  /  Romantic War Drama Rangoon Has Released, But Is It Worth Watching? Check The Review Here

Romantic War Drama Rangoon Has Released, But Is It Worth Watching? Check The Review Here

The war-romance drama Rangoon is finally out in the theatres today, with the first time ever casting of Kangana Ranaut opposite Saif Ali Khan and Shahid Kapoor! Expectations escalate whenever a movie from Vishal Bhardwaj makes its way to the silver screen. So, does the movie hold it together to showcase the acting prowess of these actors, while narrating a triangular love story at the backdrop of a war? Let us find out! The movie is set in the pre-independent India where two ideologies conflicted for its Independence – Mahatma Gandhi’s Ahimsa to end the British Raj non-violently and Subhashchandra Bose’s Army to defeat them with guns and bullets! Around this time, is a 1940’s actress Julia (Kangana Ranaut) who is everybody’s favorite. She is a swashbuckling sensation with daredevilry feats. 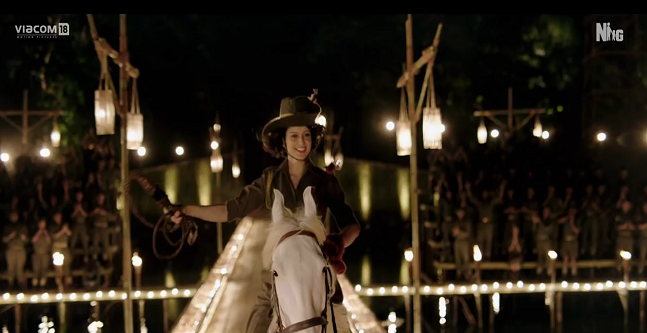 No wonder that Russi Billimoria (Saif Ali Khan), a producer of her movies, goes head over heels over Julia! He goes on an army tour along with her hoping that her intrepidity will boost the morales of the soldiers and also protect his fellowship with the British.

Nawab Malik (Shahid Kapur) is a valiant Jamadar in the Indian Army with his unwavering focus on his missions. Until he meets his match, Julia! A self-righteous man, Malik cannot separate himself from the love that cannot be his. Russi’s ambitious plans does not fructify as he comes at crossroads with Malik over Juila that leads to a series of deceit, chaos and betrayal. To paint a triangular romance breeding in the yard of a historical war requires a big canvas, and that can be seen from the almost three-hour long movie. The intention and the effort of Vishal Bhardwaj to portray a grandeur display of passion-engulfed protagonists is appreciable. But, the execution does not quite match upto the expectations as the incoherent scenes of love with war leave the audience overwhelmed with too many facts to keep up with

The saving grace for the movie is its star cast itself. Saif Ali Khan plays the role of a Parsi entrepreneur with a razor sharp quality. Kangana Ranaut is as irresistible as ever, as she gives a performance that is unforgettable like her previous ones. Shahid Kapoor, absorbs the role that he plays with ease and Rangoon is no exception for him. The songs and music are good with energy and emotions, with Gulzar’s words justifying every moment of it. Again, the movie can be a bit long, but go for the unique performances and the individuality of each of the characters as a war-romantic drama such as Rangoon comes once in a while.