Earlier IOA had received a lot of flak from various people for appointing actor Salman Khan to represent India as the goodwill ambassador. Wrestler Yogeshwar Dutt and athlete Milkha Singh criticized IOA’s decision and demanded to know why someone from the field of sports was not named by the federation.

It was then IOA decided to name Ace shooter and Olympic gold medalist AbhinavBindra and the master blaster of cricket SachinTendulkar as other two goodwill ambassadors.

IOA Secretary General Rajiv Mehta told PTI “Sachin Tendulkar has accepted our request to become goodwill ambassador of Indian contingent at the Olympics. We have received the official communication from him accepting our request.”

Thank you for the letter dated April 28, 2016 regarding the upcoming Olympic Games at Rio De Janeiro.

I have had the privilege and honour of representing our nation for twenty-four years and I continue to bat for India off the field. The welfare of sportspersons and encouraging them to give their best is very dear to me.

I strongly believe that the sportspersons from different parts of the country, pursuing their unique skills are the true ambassadors of the growing sporting culture in this country. Awareness about their struggles, discipline and single minded focus will help develop many more world beating champions and courage passionate following of the Olympics in our country.

It will be my pleasure to meet these world-class athletes before they leave for Rio to learn about their experiences and preparations. I am also happy to be part of any awareness campaign that can rally the country around our athletes and motivate them, including amplifying their efforts and success on my Twitter and Facebook accounts.

I have mentioned the nature of the role as envisaged by me as I am keen to rally enhanced support for our champion athletes. I look forward to receiving details on your planned initiatives towards this objective.

My best wishes to the entire contingent as we look forward to them proudly expressing themselves in Rio! 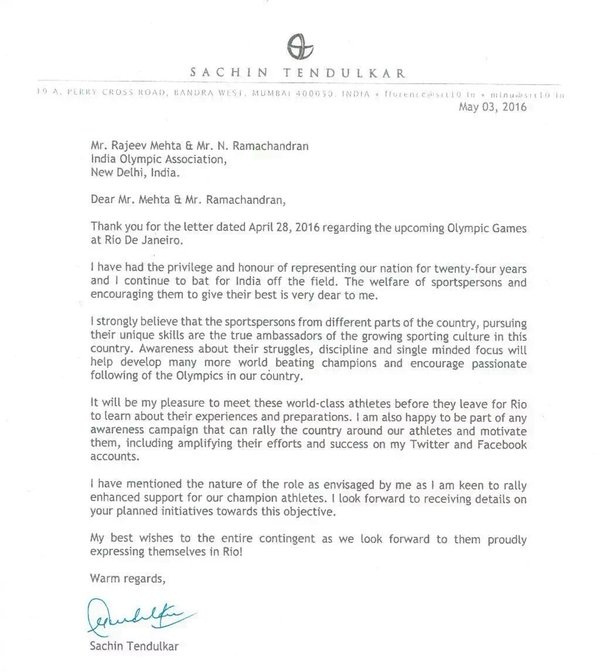