Town In Jaisalmer With No Rape Cases Since 1993 Is Exemplary

Police station doesn’t have access to electricity and water and is pitch dark at night. There are barracks for male and female prisoners but no prisoners has been kept in barrack till date.

An interesting fact about this police station is that if any notorious police official has to be punished, this prison is chosen for him to set him right because there is no electricity, transportation or water and if he wants to go Jaislamer, he has to take lift from BSF vehicles passing through the area.

According to SP Rajiv Pachar, earlier border crimes such as smuggling of narcotics and weapons were quite common here as there was no fencing. But after installing fences, those activities cease to exist. “This police station was set up in 1993 and only 55 cases have been lodged so far. In 2006, one case under Section 302 was lodged and in 1994 one case under Section 307 was lodged. Till date no case of rape has been lodged in this police station.” Pachar was quoted as saying by The Times of India.

Almost every state in India today is dealing with corruption, rape, murders, theft and a lot of other crimes and in such times having a city like ShahgarhBulj where people are living in peace and solidarity and are far from any sort of felony is exemplary. 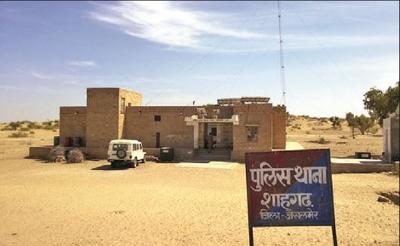