Virat Kohli Slams Trolls On Anushka With His Strong Message

Virat Kohli has once again proved that he is not just a great cricketer but also a true gentleman as he silenced the trolls on Anushka Sharma that started flooding on the social networking sites after he displayed an outstanding performance in the matches against Bangladesh and Australia.

Shame on those people who have been having a go at anushka for the longest time and connecting every negative thing to her. Shame on those people calling themselves educated. Shame on blaming and making fun of her when she has no control over what i do with my sport. If anything she has only motivated and given me more positivity. This was long time coming. Shame on these people that hide and take a dig. And i dont need any respect for this post. Have some compassion and respect her. Think of how your sister or girlfriend or wife would feel if someone trolled them and very conveniently rubbished them in public.#nocompassion #nocommonsense 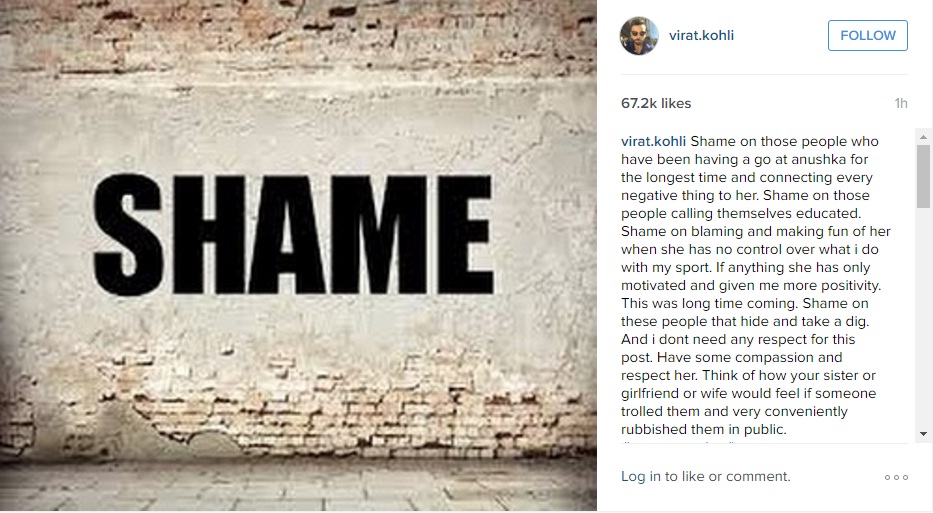 Last year, Anushka Sharma was blamed and trolled over the social networking sites for Virat Kohli’s bad performance and India’s exit from the ICC Cricket World Cup. Virat Kohli had come to her rescue shutting the trolls with his statement “At a human level, I would say I was hurt and the people who said those things and the way they said should be ashamed of themselves”.